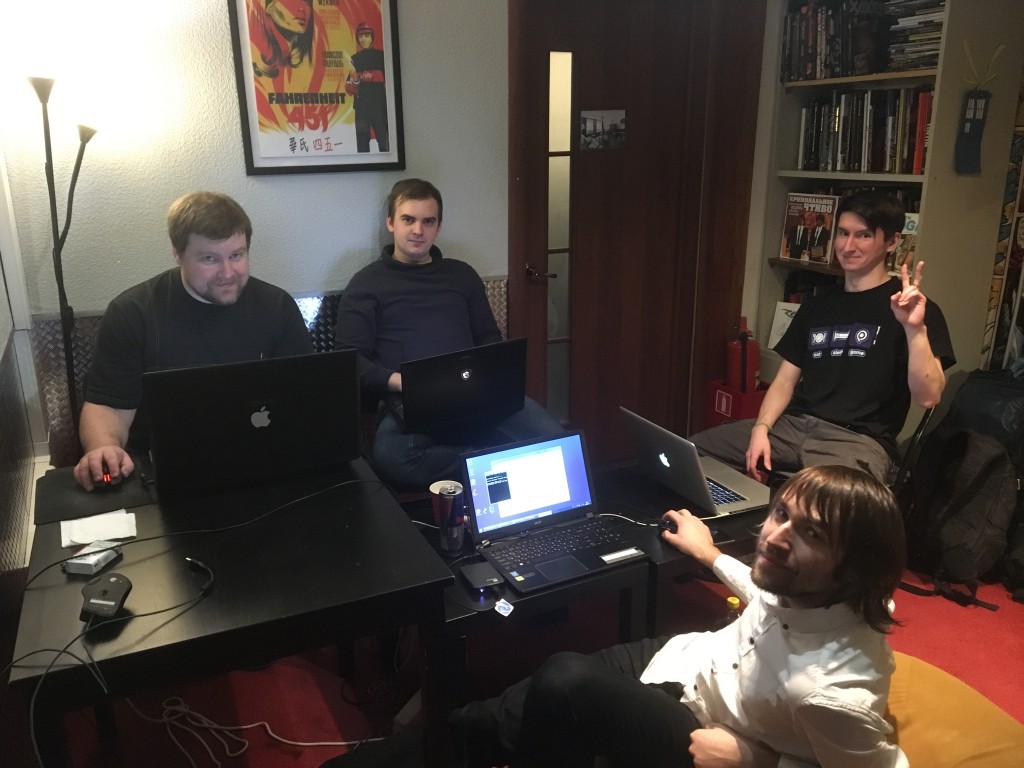 According to the rules, coming to GGJ with team is pretty unwelcomed. So we were already mentally prepared to play the dramatic scene of “meeting” each other, when suddenly it turned out that the locals in timecafe GeekTime (which is a single location of GGJ in Moscow, which is a shame) has nothing against already formed bands. As a result, only a few (of about 30-40 people that made it to the Moscow GGJ) came alone, looking for a party. 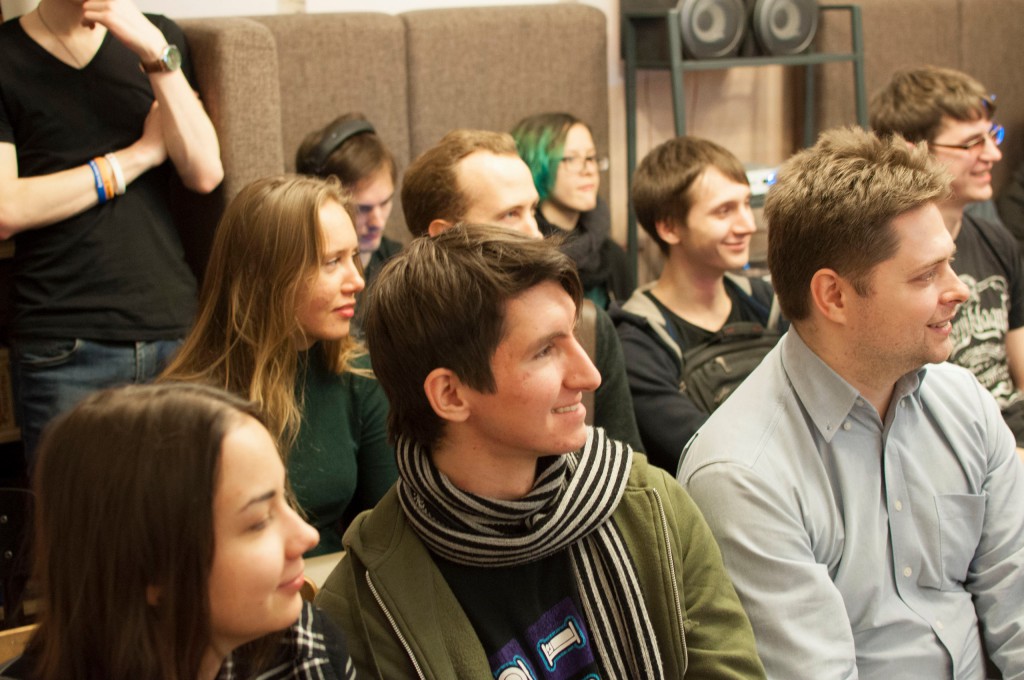 Official announcement of the theme was delayed because of the ferocious amount of ads, motivational clips from past GGJs, fun tips about the benefits of sleep and food, and other things that has been shown in a conference room on the projector. Finally, the long awaited title «And the theme is …» shown up, followed by the sea waves on the beach, applause at the stadium, guitar string, drawing sinusoid, and god knows what else. The theme, as everyone already guessed, was the “WAVES”.

Right after the announcement – a small free-for-all brainstorm. Cooked up nearly 30 ideas about what can be waves: from the obvious light, sound and radio waves, to “waves” in the Tower defense, waving a hand (verb «to wave») and even waves on the fat belly. Then cafe admins, for some reason, tried to steal another bit of our precious time by convincing us to stay in the conference room and to hear some speakers with topics like “how to write beautiful code in Unity”, but the most adventurous comrades (including us, of course) quickly switched to a much more important things – brainstorm inside the team and to just arrived pizza. Pizza, noodles, porridges and cookies are included in the 1000rub payment, required to participation in the GGJ in that cafe.

As you may know, from the clash of opinions emerges not only the truth, but the concept of your game – and in our case it was the idea to show the principle of wave-like exchange of information on the example of the ant colony. The concept sounds “a little bit” difficult for the 48-hour production cycle, but we are: a) lunatics. b) not looking for easy and banal ways. c) see the first paragraph.

We chose Unity as a primary tool, which allowed Nick and Stranger to write code at the same time. For Dima, by the way, it was the very first project in Unity, but we decided that this is the lesser of two evils – in comparison to allow him to do 3D-modelling stuff, that Stranger wanted to do on the jam so badly (a humble note: Stranger’s last experience with Blender was…well… quite some time ago, to say the least). For Nick, it was a 5th or 6th project in Unity. However, all the others haven’t left a prototype stage. Roller traditionally did music and sounds, while I enthusiastically spent time on various administrative stupidity, playing the guitar, voice-recording ants, as well as managing our workplaces. Also, I have to mention the remarkable artist Ella, who has agreed to help us and produced so many art, that we have not even managed to insert it all in the game before deadline. 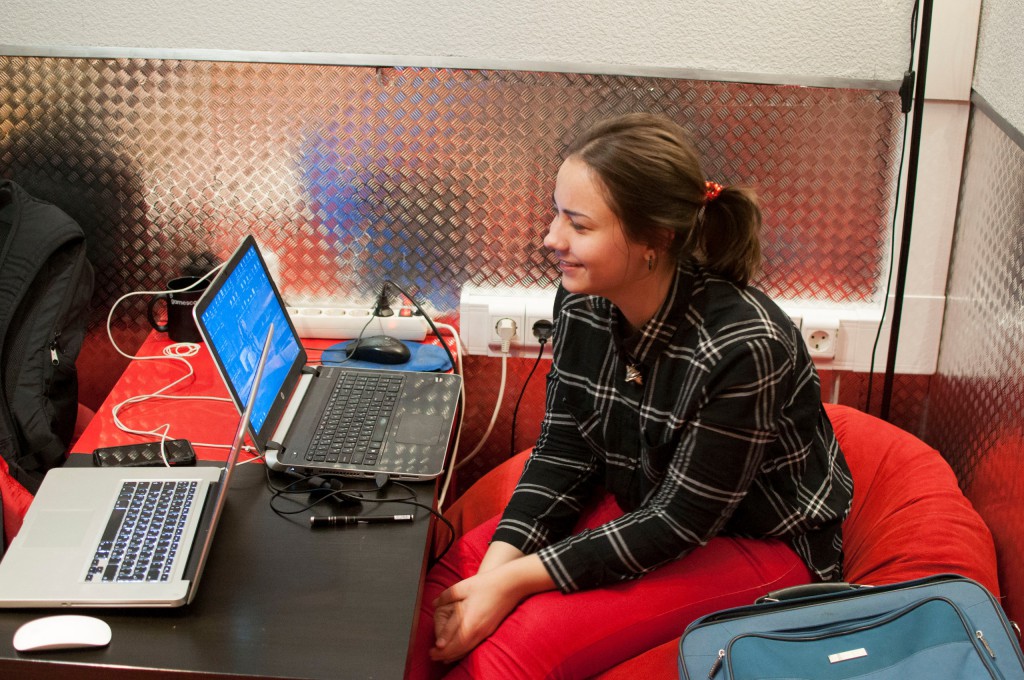 Been working till 11am on Saturday morning, we began to slowly dissolve to homes for some sleep. For past 10 work hours, we barely made a working prototype. A slick image of RTS about an anthill you need to take care of, had a chance to shrink up to individual ants, who can be scared by click… 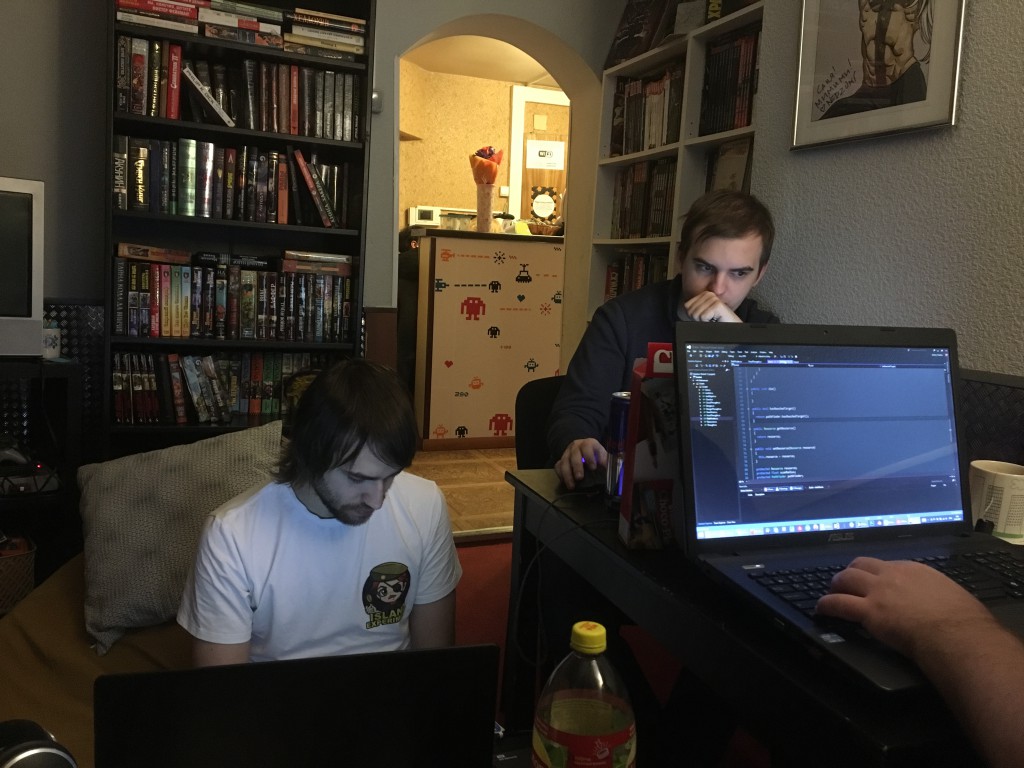 After ~6 hours of sleep, slooowly going back to the cafe, and about at 22:00 on Saturday all set to work again. Overcame space and time, sleep and hunger, drank near-deadly amount of energy drinks, by 16:00 on Sunday we got something very similar to the original idea: ants have memory and thoughts, that they exchange with one another in a small radius; location of food and resources are randomly generated; you can scare ants in a small radius and thus lead them, by tapping on the ground; from time to time an enemy appears on the map, so you also need to think about defense of the anthill. 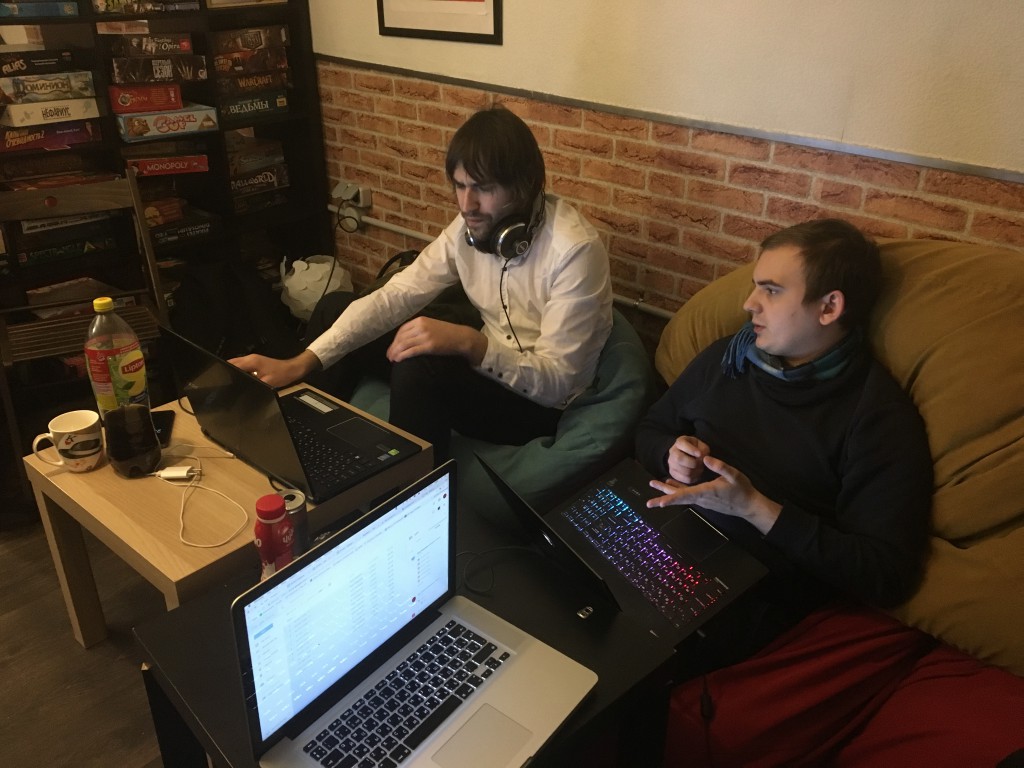 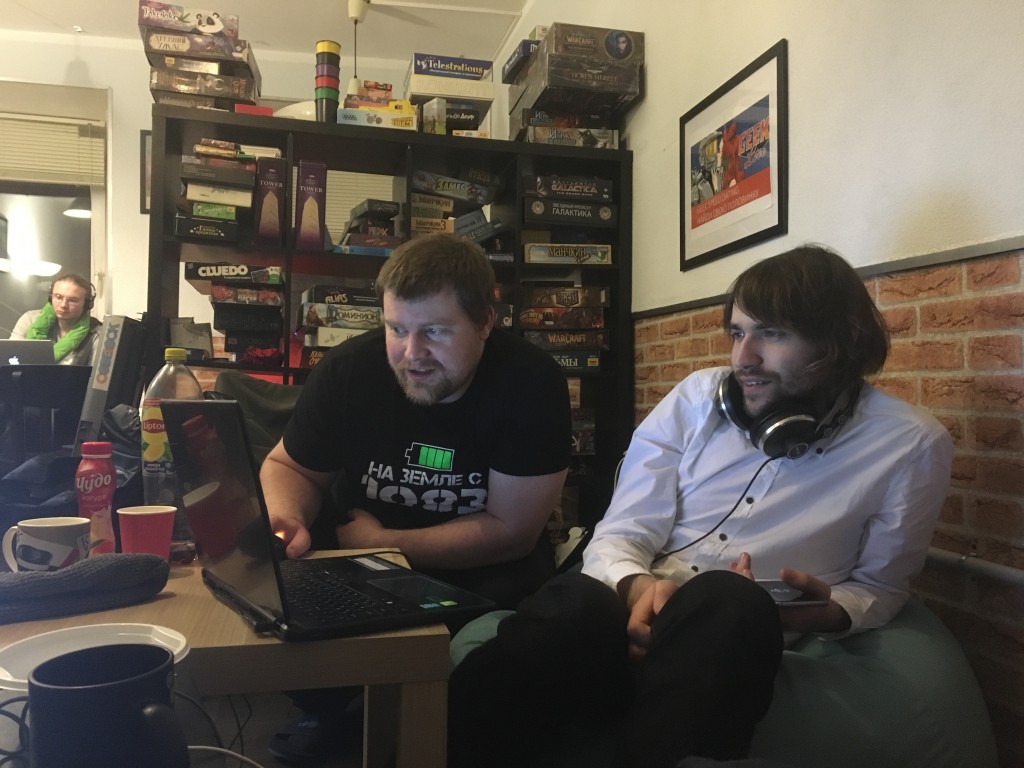 But time is ticking. Everyone pushing hard to deadline at 16:30, but at the last moment it turned out that the GGJ site will accept games almost until midnight. But there’s another stress – presentation. Each team must show what has been done in the past 48 hours. Conference hall is full, people are literally sitting at each other’s head. The presentations are underway, Stranger still fixing something in the build, and I am quietly going crazy because of the fear of “going on stage”. Finally, the time has come. We are going on stage. Stranger run the demonstration, while I spoke to the audience and tried to convince the crowd that the ants were the real theme of GGJ. 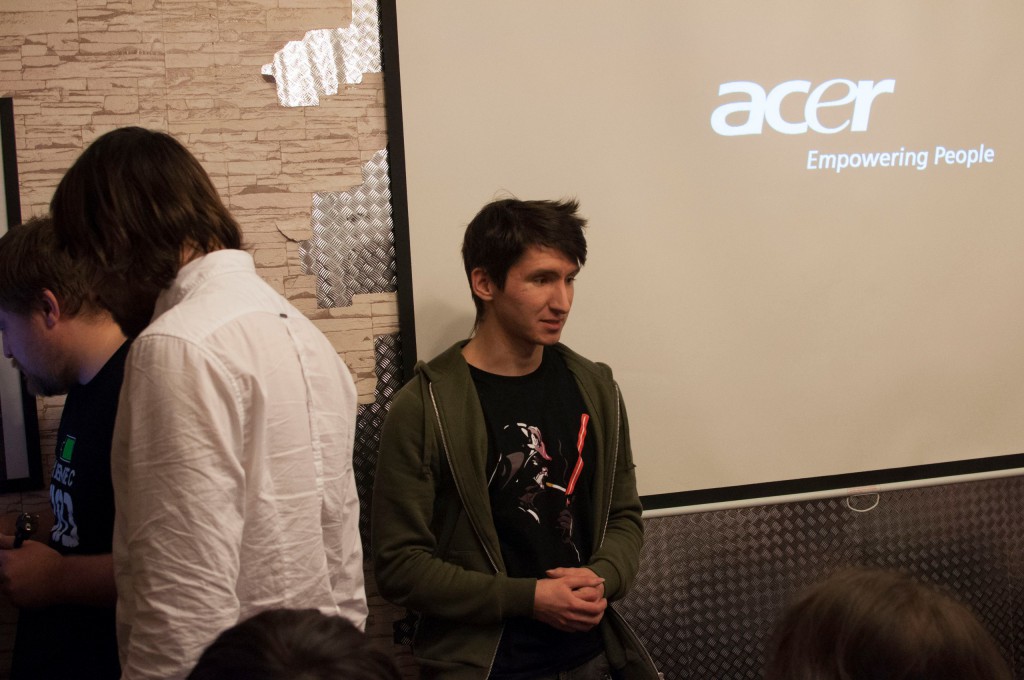 Being done with presentation and listening to the rest of jammers, we cooled off slowly. Seems like we did a good job – the presentation as well as the game itself. Of course, GGJ site is not responding under heavy load, but we don’t give a shit. Half an hour later, cafe administrators asked us all to return to the conference hall for the prize ceremony. Basically, there are only three “official” nominations: the best of VR, the best of tabletop, and Best Of The Best. But what a surprise it was, when Dividebyzer0 was invited on stage once again! The jury though did not give us the first place, and yet gave us a sudden credit: “Guys, honestly, if the jam theme was “ants “- the grand prize would be yours, for sure! And because of it, you win in the category “best ants!”. Wow. That was…as cool as unexpected.

In the end, we found ourselves debriefing at “KILLFISH” bar, where we drank away our dreams about making ants a complete game, selling it, and moving to Bali. But as they say, that’s another story.

The project name is “ErrAnt”, and you can play in it right here:
http://globalgamejam.org/2017/games/errant